In 1919, newly-weds, George and Ada Seymour came to Jersey for their honeymoon. They fell in love with the island and their guesthouse experience sparked the idea that they should start their own. Once back in the UK, now determined to help create happy holiday memories for others, they packed up their life and made the move to Jersey in 1920. And the rest? Well, that’s our history.

This timeline looks back at the century of Seymour Hotels. A lot can happen in 100 years and we have pulled out some of the key dates and events, we hope you enjoy reading and seeing how much has changed. 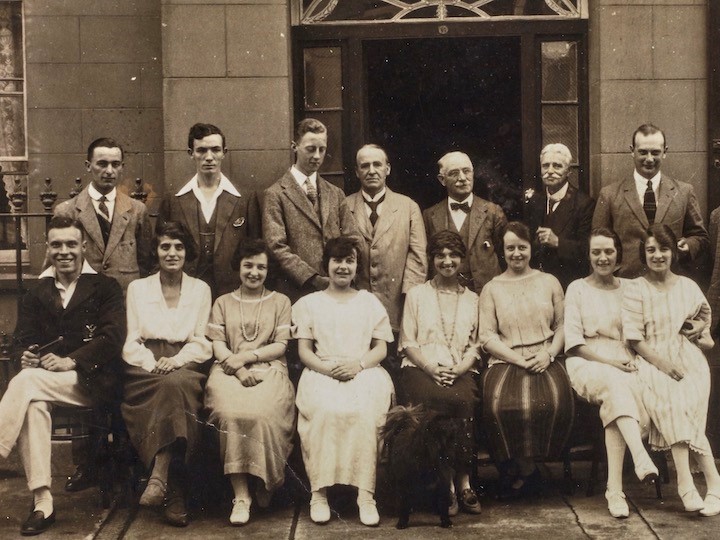 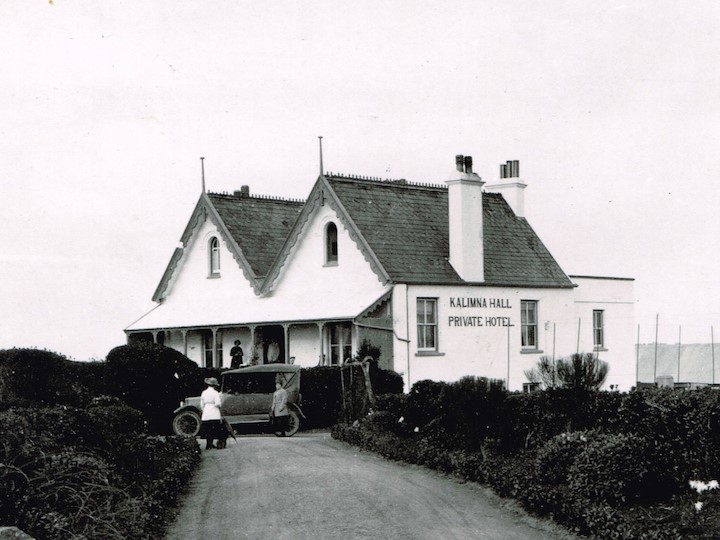 Watching George and Ada’s guesthouse grow inspired George Andrew and Mary Ann Seymour (George’s parents). They purchased Kalimna Hall in St Brelade and soon came out of retirement to open the Portelet Hotel. A silver service hotel, it was well-known for its dance floor and staff. Spare jackets were even kept on standby for guests who had forgotten theirs. 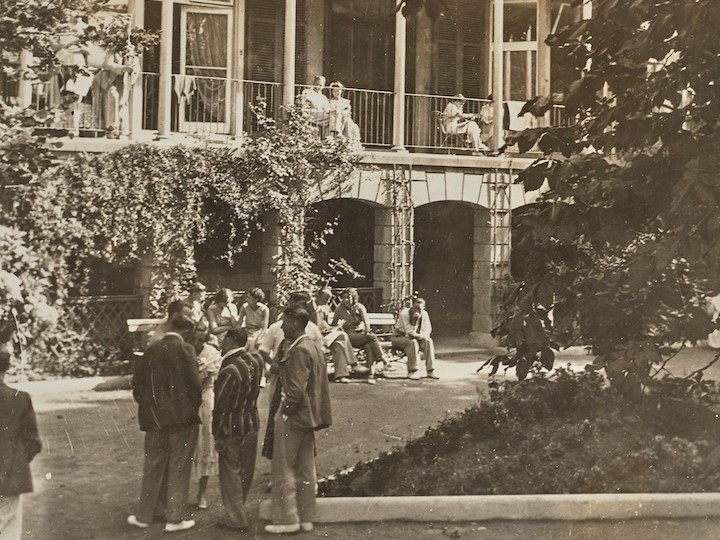 George and Ada soon outgrew their guesthouse on Halkett Place. So, in 1923, George purchased Fontenay House on Belvedere Hill, to transfer business from Merton House. This would become the Merton Hotel and undergo numerous extensions and renovations over the coming decades to transform into the hotel we know today. 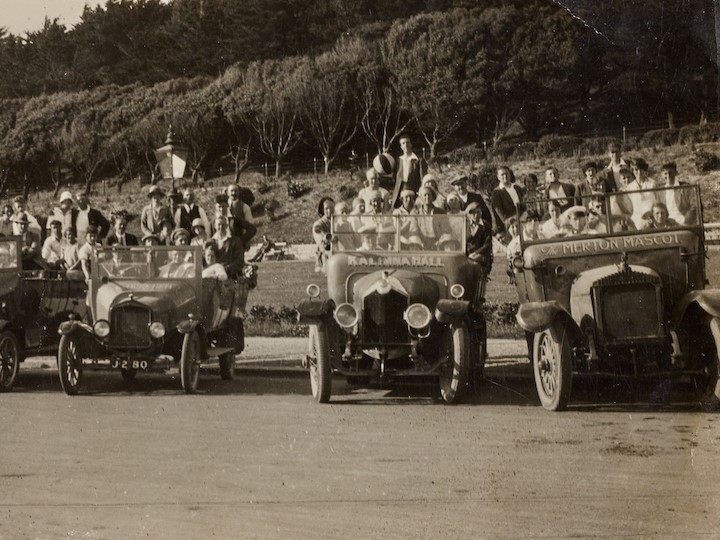 In the 1920s, visitors would arrive by boat and many would not have booked a hotel. Meeting passengers straight from the boats and getting the hotel name immediately into visitors’ minds was instrumental. So, George created a coach business for meeting guests at the harbour and for tours and trips around the island. Over the years Mascot Motors Ltd would expand and by 1963 also include hire cars. 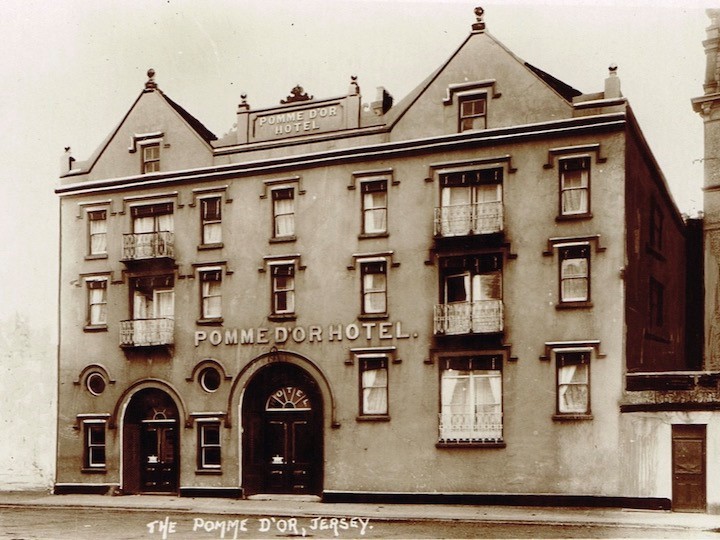 George and Ada added to the family’s collection of hotels with the purchase of the Pomme d’Or Hotel in 1930. Immediately, they began renovating as the hotel had been lying derelict over the previous ten years. George and Ada were determined to breathe new life into the beautiful building, and they did. One of the new guests was Robin Seymour, George and Ada’s son and our chairman, who was born in 1931 in the hotel!

The bridge to Plemont Bay from the headland allowing beachgoers to reach the sand and sea was in a complete state of disrepair. Having acquired Plemont Developments Ltd, which included the bridge and café, the Seymours re-developed the sites and repaired the bridge so visitors could continue to enjoy the sandy cove. (The only way to reach the beach was to cross the bridge.) 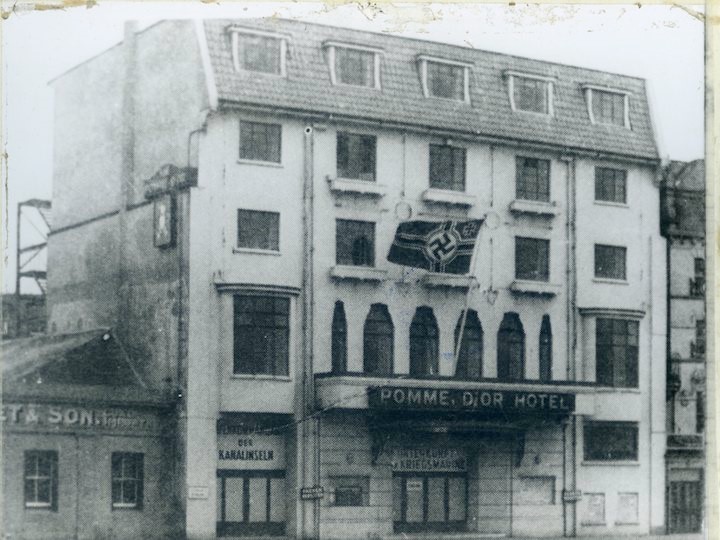 At the beginning of the war, Jersey was still a favourite holiday destination. However, this came to an end in the Summer of 1940 when Hitler’s forces occupied the Channel Islands. All of the hotels and Mascot Motors coaches were commandeered by the German soldiers; the Pomme d’Or was used as the Kreigsmarine Headquarters, the Portelet Hotel became the Luftwaffe Billet, and the Merton Hotel was used as a hospital.

But not everything was taken by the German forces. Prior to their arrival, George and Ada, with other members of their family, buried the silverware and some other items in their garden to keep them safe. 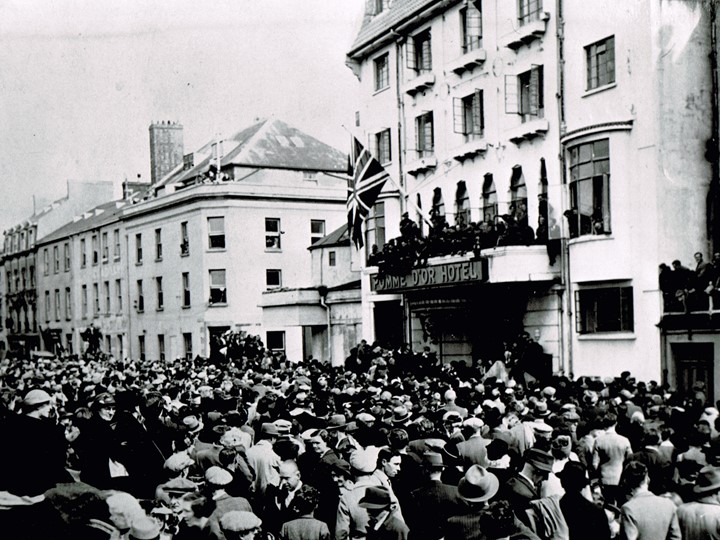 On the 9th May 1945, Jersey was liberated. George and Ada, alongside their family, now had to face the enormous task of rebuilding the hotel group. The hotels had been left in tatters, with walls missing and the furniture scattered all over the island. The first task was to dig up the cutlery (and any other items they had been able to hide) and use the last remaining lorry from Mascot Motors to scour the island looking for their missing furniture. But they did it! 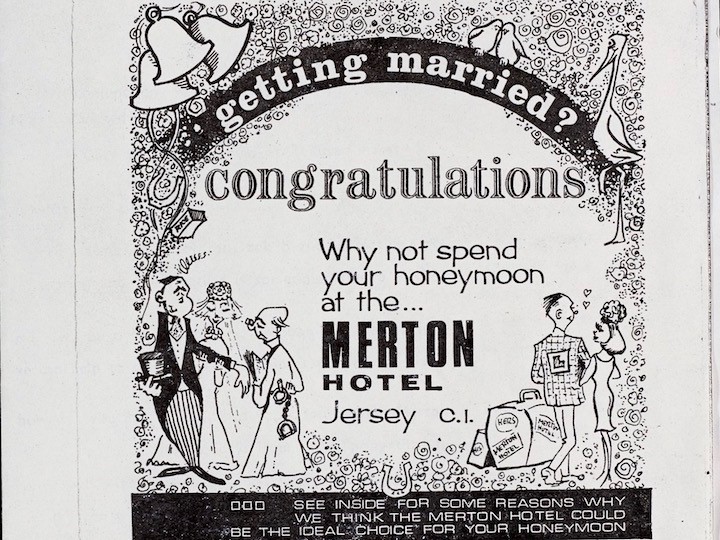 After months of hard work, the Seymour Hotels opened for the 1946 holiday season and immediately welcomed guests. Many couples had postponed weddings due to the war and were finally saying ‘I do’; George noticed that 11 couples had all come for their honeymoons in early April. Having spent his own honeymoon in Jersey, George was inspired and set about to transform Jersey into Honeymoon Island. Until the late 1960s, thousands of couples would come to Jersey in the Spring. The Merton was even nicknamed Honeymoon Hotel. 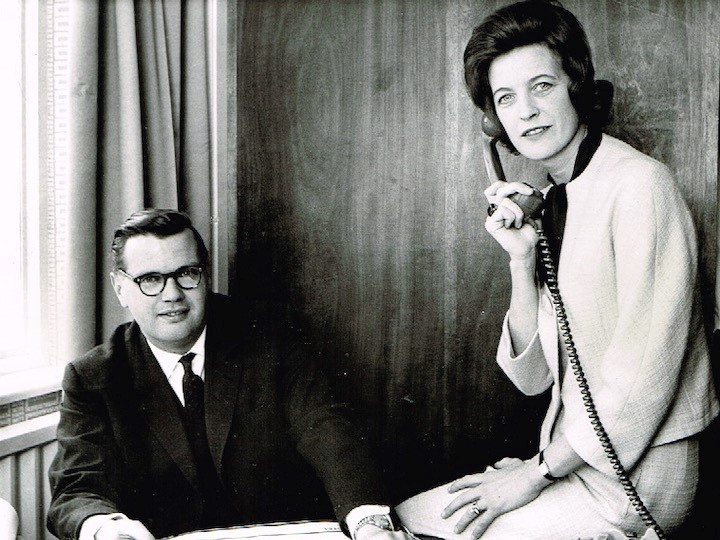 Robin, now 23 years old and just back from studying in Lausanne, and his new wife Rita joined the Seymour Hotel Group. Robin started out as Junior Manager at the Merton and Rita as a Receptionist at La Plage Hotel (which had been purchased by the group in 1948). Working their way around the business as they started their family, Robin would soon become joint Managing Director of Seymours Limited and Rita would take responsibility as General Manager of Hotel de la Plage.

The hotel group’s first private bathrooms to bedrooms were installed in the Portelet Hotel in 1955. Guests had always shared the bathroom(s) on their floor and it was uncertain how guests would take to this big development or even pay a supplement for the convenience!. So, the hotel started small. A total of 24 were installed in one wing of the hotel only, and each had two doors: one into the bedroom and one into the corridor. This was so that if the bedroom was unoccupied, it could become a shared bathroom! 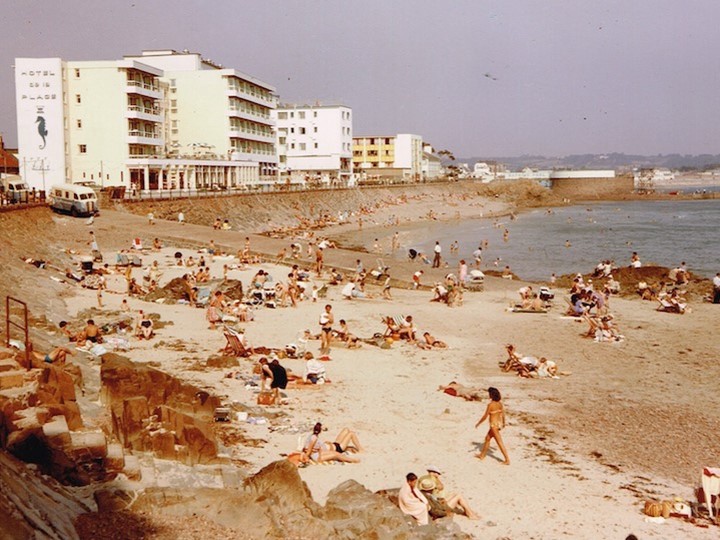 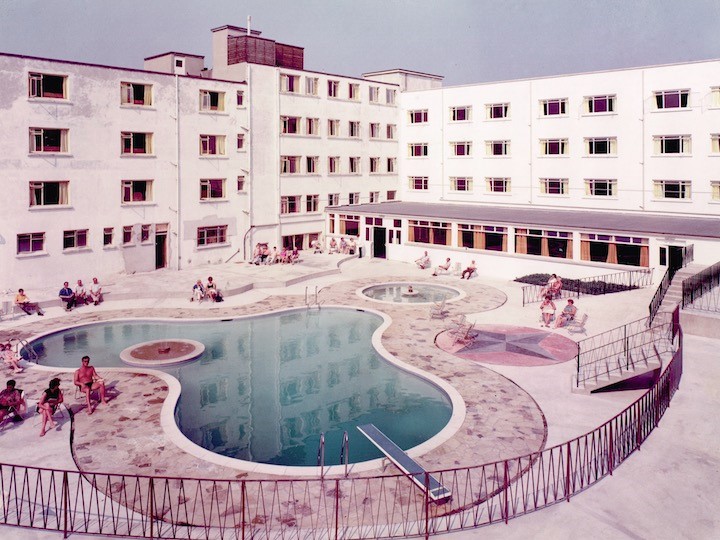 The Le Coie Hotel was added to the Seymour Hotels fold in 1972. At this point, the Le Coie was the third largest hotel in the island, accommodating 500 guests in 300 bedrooms, and the Merton Hotel was the largest. A big achievement for having begun with only a five-bedroom guesthouse.

In 1981, David – our current Managing Director, Robin’s son and George’s grandson – joined the group, getting involved with the Café Bar at the Pomme d’Or. Not long before this, David’s childhood sweetheart, Tina – and our current Housekeeping Director – joined the group as Rita Seymour’s assistant. It was working for the Seymour Group that allowed David and Tina to reconnect as friends before Tina officially joined the Seymour family. 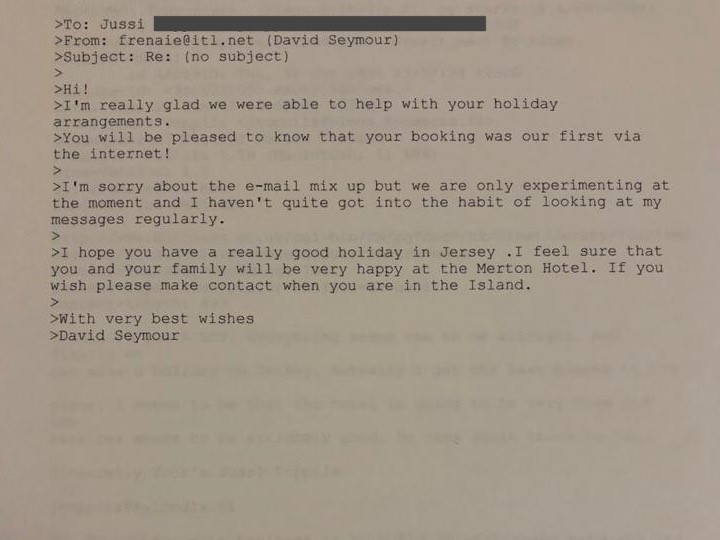 Embracing the internet for the hotel was a project led by David and in June 1995, Seymour Hotels took their first online booking. Made using the site SuperNet, which became CINet, the Seymour Hotels were actually the first Jersey Hotels to sign up. 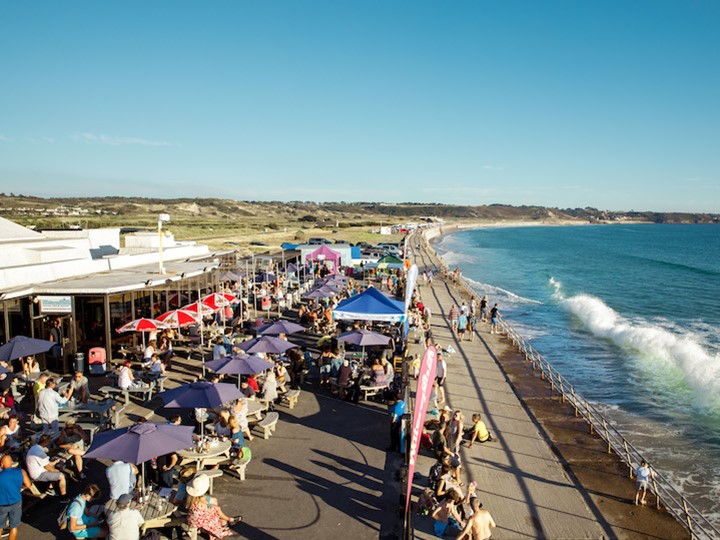 In 2004, Seymour Hotels purchased the Watersplash, an iconic waterfront diner that is a focal point of surfing in the island and has become one of Jersey’s favourite nightspots. In 2018, the diner received Plastic Free status from local group, Plastic Free Jersey highlighting Seymour Hotels commitment to caring for the environment. 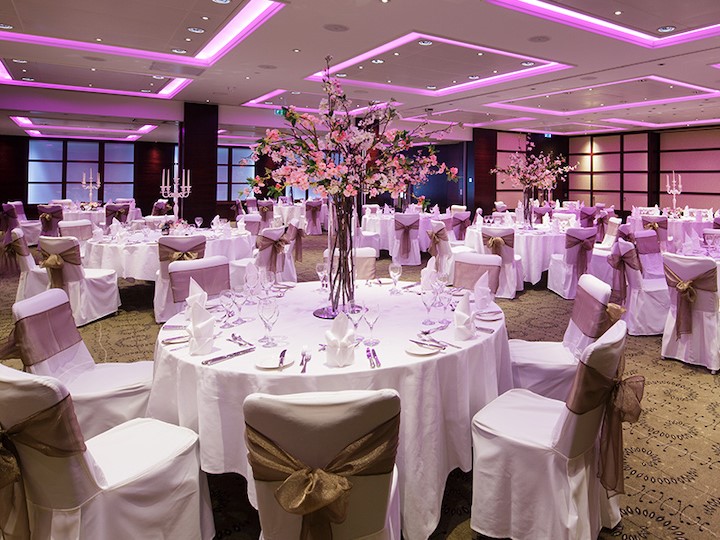 As well as providing happy holiday memories for guests, we seek to fulfil the needs and wishes of locals. So, in 2009, to meet the evolving business and conference demands within Jersey, the Seymour Hotels group embarked on a large renovation of the Golden Apple Suite. With an abundance of technology, a stage, and its own private bar, the Golden Apple Suite is perfect for any event, whether it’s for business or a family event. 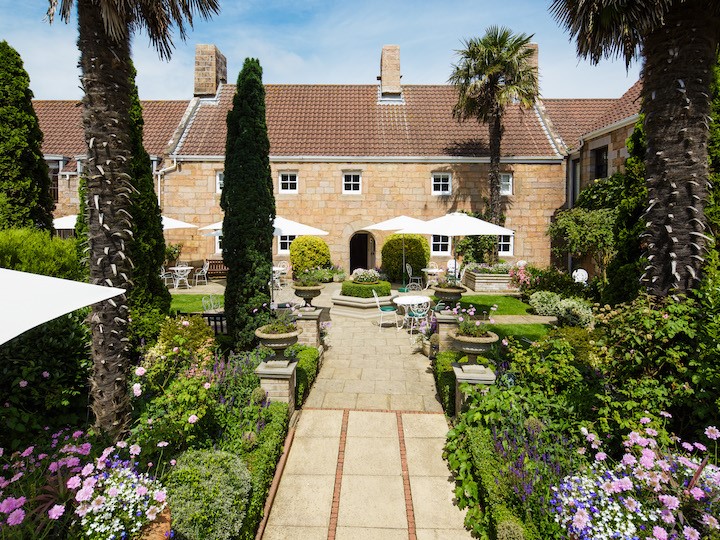 The Greenhills Country House Hotel is the latest hotel to join the Seymour Hotels group. Having undergone a series of refurbishments, the hotel offers luxury in a tranquil and rural setting and provides a home from home feeling for all who cross the threshold of this 17th century farmhouse. 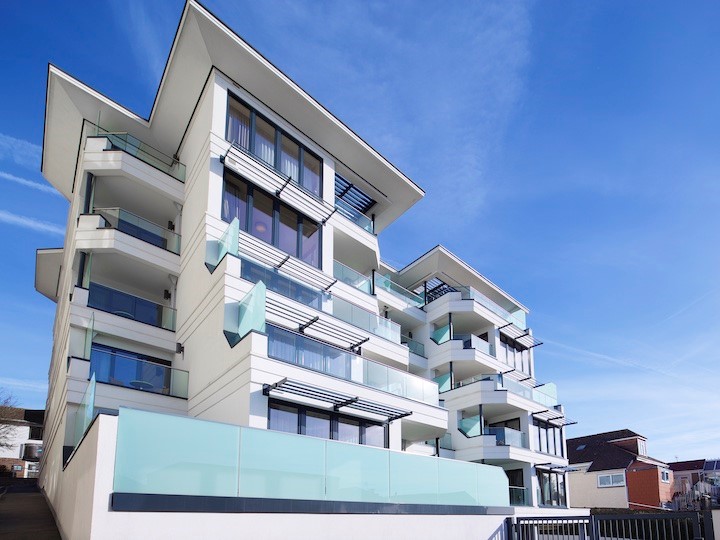 Over the years, the nature of holidays has changed and perhaps the biggest is the rise in self-catered holidays. So, on the 18th June 2011, the Seymour Hotels group opened the Merton Suites. Creating these 28 stylish apartments allowed the group to grow and develop their portfolio of properties, to include self-catered holiday accommodation and long-term lets, and invest in Jersey’s continued growth as a holiday destination. 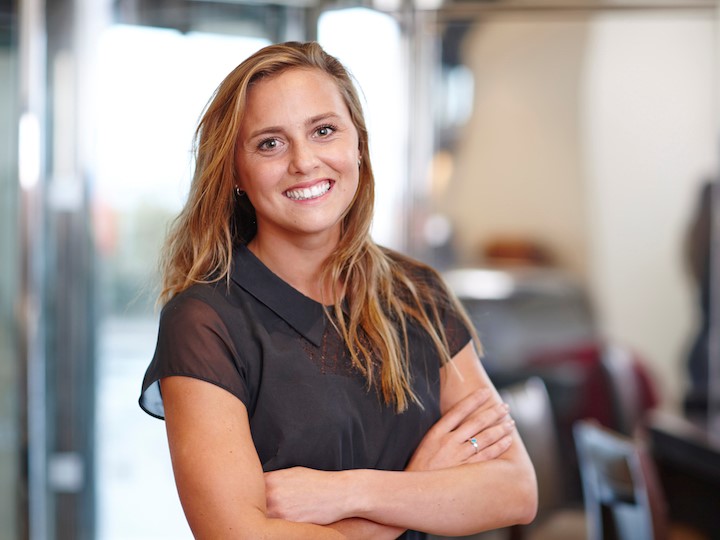 In 2011, the fifth generation of the Seymour family joined the group as Stephanie, David & Tina’s daughter, took on the mantle of Seymour Hotels Marketing Co-ordinator until 2017, prior to joining her husband Richard in their own family business. 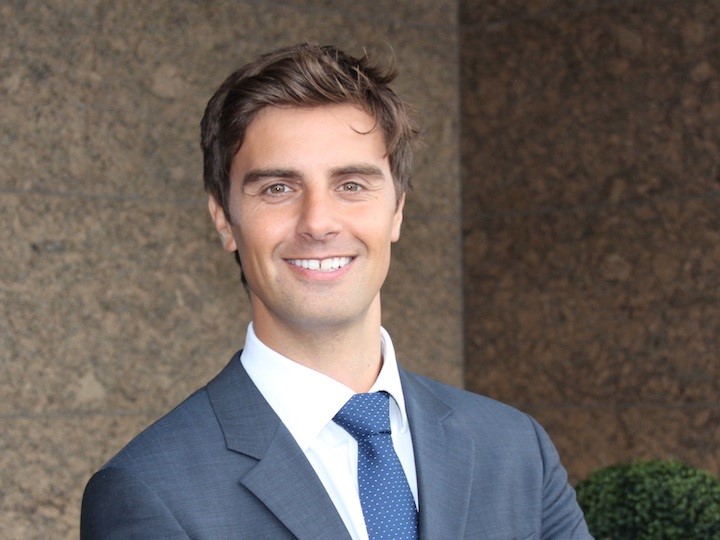 And in 2017, Stephanie’s brother, Matthew joined the fold as Group Operations Co-Ordinator. Seymour Hotels: very much a family concern! 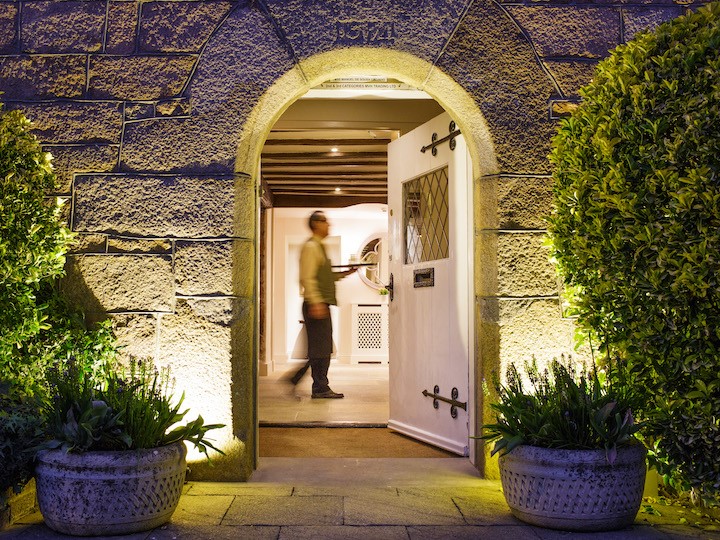 With three hotels (the Pomme d’Or, the Merton, and the Greenhills Country House Hotel), self-catering apartments, the Aquadome, and a waterfront diner and nightclub (the Watersplash), Seymour Hotels now employ over 350 staff during the peak summer seasons. Committed to continuously delivering excellent service, we strive to make sure that all who arrive as guests leave as friends.

We’re excited to celebrate the milestone of our centenary and providing holidays full of happy memories for many more years.