How did the Pomme d'Or get its name?

Just like the hotel itself, our name is draped in history. To tell the story of the ‘Pomme d’Or’ we have to hop back in time more than 200 years.

Starting out in a stable

In 1802 work commenced to build the Esplanade, Weighbridge and Commercial Buildings. The area was to become Jersey’s new centre of trade, and the site on which the Pomme d’Or now stands was purchased by the Pellier family. Phillipe Pellier was a corn and flour merchant who owned several mills and a large store to the east of the current Café Bar. At the rear, in Wharf Street, stood Pellier's Livery Stables and a house which they rented to Mr. Dates, who ran “Dates' Boarding House”.

A name fit for a famous cider

In 1837, The Pelliers gave up the stables, demolished them and constructed a hotel which they named the Pomme d’Or, after the well known cider produced at No. 4 Wharf Street. Pomme d’Or Cider, translating to Golden Apple Cider, was as well known to Islanders in the mid-1800s as Mary Ann Beer was in the 20th century. Up until the Great War in 1914 the hotel was successfully ran by the charismatic Madame Boisnet, who soon won the patronage of the merchants along the Quay, and visiting military officers.

It wasn’t until 1932 that the Seymour family purchased a rather dilapidated and disused version of the Pomme and returned it to its former glory. Since then, the Pomme has been continuously owned and managed by the Seymours, except during the World War II Occupation when the Nazi commandant seized the property to use as his Naval Headquarters.

A nod to our origin

Today you can find plenty of nods to our name's origins dotted around the Hotel. Artwork of apples can be found hanging from the walls in the lobby, while the Golden Apple Suite regularly hosts the Island's most glamorous events.

The Pomme d’Or is a part of the fabric of Jersey life. We’re extremely proud of the hotel's history and enjoy sharing the stories of times passed. If you’d like to know more about the hotels history, visit our timeline or head to our IslandWiki page and view the archive galleries. And if you have any stories about the Pomme d'Or that you would like to share, please get in touch and let us know! 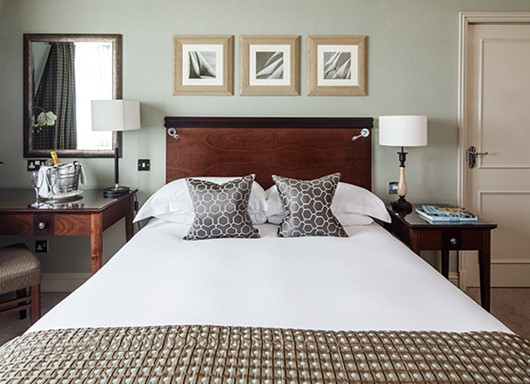