Enjoy the biggest sporting events in style at the Pomme

Great drama and the fight for glory have already graced the world of sport this year, from the icy thrills of Winter Olympics in South Korea to the fiery conclusion of the Six Nations Rugby last weekend.

However, 2018 has many more tremendous occasions still to come, and at the Pomme d'Or we have great facilities in which to enjoy the sporting moments that matter to you with your friends, family or colleagues.

After the carnival in Brazil four years ago, Russia is calling for this summer's Fifa World Cup showdown. The twists and turns leading up the tournament have produced many surprises - with Holland, Chile, USA and Italy not qualifying to attend the finals.

As always, England's hopes will fall on the fate of a few young shoulders, with a country ready to hold it's breath and bite fingernails during the crucial latter stages. England's group looks favourable and in a cooler climate the team may fair better than other recent tournaments. Here are England's Group G fixtures:

On the opening weekend of the World Cup, arguably the biggest clash in the opening group matches will see Portugal take on Spain in group B - a game that could set the tone for rest of the championship:

With the groups concluded and first knock-out rounds completed, July will see the business end of the tournament, with the semi-finals taking place midweek on the 10th and 11th, and the final on Sunday 15th, kicking off at 16:00 (BST). Who knows if England, Portugal or Poland will make it - but the final in Moscow will be a game not to missed!

A summer of finals

Before the world turns to Russia, May brings the club football season to a close with both the FA Cup and UEFA Champions League finals being contested on the 19th and 26th respectfully.

Summer will also see the Wimbledon Ladies' and Men's Finals on 14 and 15th of July (the same weekend as the Fifa World Cup Final), the British F1 Grand Prix on the 8th of July, and the Open Golf tournament at Carnoustie teeing off on 19th of July.

Whoever you decide to support, the staff at the Pomme d'Or can help make a great occasion of the day for you and your guests. Depending on the size of party, the Liberation Suite, Cox’s Suite and the Golden Apple Suite can be prepared to fulfil the needs of the big sporting day, with all suites having large screens and fantastic PA systems to provide a great viewing experience.

Catering to please the crowd is one of our specialities, and our events team are available to discuss a bespoke food and drink package tailored for you. When booking a suite we can arrange for a bar and buffet service to be enjoyed before, during and after the match - a big perk of which will be no bar queues during key moments!

Speak to our events team

When it comes to events at the Pomme d'Or, there are no limits. Whatever you may be planning, no matter how large or small, our events team will be delighted to help you make the most of 2018's sporting spectacles. Call them on 01534 751 372 or email events@pommedorhotel.com. 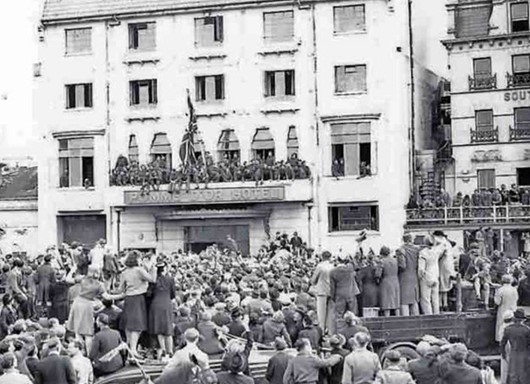